Last Friday I was at the Dibner Library looking at amazing 16th and 17th century books by the likes of Andrea Palladio and Robert Hooke (see previous post).  This Friday I am at my home library reviewing books for an upcoming exhibit on "bestselling fiction in America".  Quite the contrast!  Where the Palladio book was a fascinating mix of the original text plus a re-purposed 15th century vellum music manuscript, some of the books in this exhibit are, well, plain old "racy". 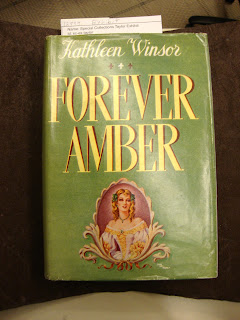 Forever Amber, (which was banned in Boston!) is the story of Amber St. Clare, who (according to the front flap on the dust jacket) "uses her striking power over men to gain her own ambitious and worldly ends".  Wow!  Apparently it was the bestselling book of the 1940's, and was made into a movie. 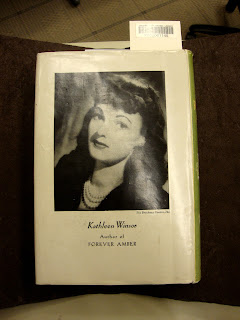 I love this author photo!  When I write my bestseller, I want to look just as glamorous.

Most of the time 20th century books don't really interest me.  The bindings are all pretty much the same: case binding; machine sewn signatures or adhesive bound; glued-on endbands; plain cloth.  The dust jackets can be fun, but there is nothing structurally distinctive to catch my "binder's eye".  But I have noticed one thing about books printed during WWII, the paper they're printed on is different, usually thinner, duller and a little more flimsy feeling as you flip through the book.  I know that paper production changed during the war; so many resources went toward the war effort, that it is no surprise, really.  But still, it's kind of neat to have a subtle, tangible hint of how all aspects of American life were affected at that time. 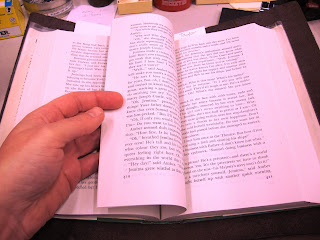 I doubt this picture can convey the details I'm describing, but if you ever have a chance to compare a 1940's era book for yourself, you'll see what I mean.

Posted by atthebench at 1:51 PM

I have a first edition copy of this book with a newspaper clipping from Australia where its sale was baned when it was released!!! My mother named me after this book...glad to see it was in good hands!!!