While I was very pleased with the results of my treatment of our Library's copy of Andrea Palladio's I quattro libri dell'architettura that doesn't mean that I'm done with Palladio.  I may never treat another copy of this work or another Palladio book, but I can certainly keep learning about 16th century printing and bindings and the best way to do that is to look at other copies. 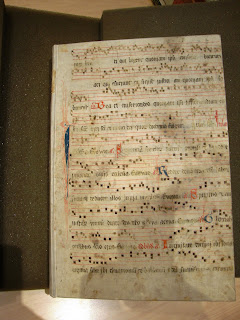 This is the Dibner Library's copy of I "quattro". Like the UVa copy the original binding has been lost to time and while the "re-binder" did do another vellum binding, they chose to use a 20th century case binding instead of something more contemporary with the text. 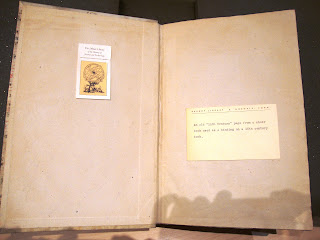 See the note from the Burndy Library, confirming my first impression. 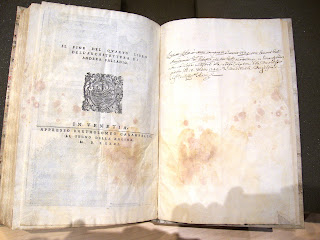 I love this colophon and the marginalia on the facing page. 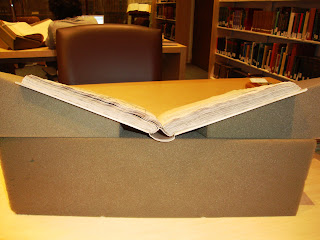 And what do I mean by case binding?  See in the  picture below how the spine of the book pops away from the spine of the cover.  Back in "the good old days" books were sewn on leather thongs or heavy cords which were laced into wooden boards or a piece of vellum. In the late 19th century book production became more of an industrial process and the process of sewing and making the cover became two separate steps.  The parts were joined by gluing the first and last pages (and maybe some linings) to the insides of the covers, much less sturdy, but much faster.  I'm not sure why the binder chose a case binding for this book, but the work is neatly done and since book has been in a rare book library since the early 20th century, careful handling has kept the binding intact.

I'll post some pictures of my Palladio when it comes back from exhibit.  Stay tuned!
Posted by atthebench at 7:17 AM