Hello! My name is Emilie Duncan, and I am the new graduate book conservation intern in Eliza’s lab at UVa. I am a third year fellow in the Winterthur/University of Delaware Program in ArtConservation, and as such, will be completing a yearlong internship here. Designed as a practical, hands-on follow up to my first two years, the internship will involve treatment of both special collections and circulating library books and archival documents, participation in general preservation activities such as exhibit prep and pest management, and generally getting my feet wet with book conservation in the “real world.”

At the close of my third week here, I already have lined up some exciting and fascinating projects. Three weeks spent “lining up” projects? You might think I have not been using my time wisely, but there is a lot that goes into a conservation treatment before the actual treatment even begins.


The first step is careful examination and consideration of the object at hand, including its materials, construction methods, and current condition problems. All of this information is necessary to plan out a treatment that will effectively and safely stabilize its condition and make it accessible to researchers. For example, in my first week, I was presented with a large box of maps and broadsides that had been stashed away by a former stacks manager because they were in need of some sort of treatment before being housed in the library stacks. One of the details that I recorded during my examination was media type and print process. Knowing what materials are present can help determine what treatment methods are possible. The oil- and pigment-based lithographic printing ink used on the bulk of the objects is not sensitive to water-based treatments, such as bathing. However, the poor-quality iron gall ink inscription at the bottom of one of the broadsides may include added ingredients that could wash away during aqueous treatment, so thorough testing will need to be carried out in order to ensure that the treatment does not alter the document in a negative way.

Another important factor to consider before proposing a treatment is the historical and material context of the object. This information can help to understand construction and condition aspects of the object as it exists today, as well as aid in determining specific goals of a treatment. A good example is another one of my upcoming projects, an early copy of Francis Bacon’s Sylva Sylvarum (an exhaustive natural history record published shortly after his death in 1626). I say “early copy” because the book is lacking the title page (and the front board, and most of its spine… but that is less relevant at this point) which contains the date of publication. It would be fairly easy to just look up the publication date of the book, but that is complicated by the fact that the book was republished in almost 20 editions in the 17th century alone, and without the title page it can be tricky to determine which edition I am looking at. However, in comparing the text with other copies of other editions in the special collections, and with images of other editions available online, I began to parse out the small differences that set the various books apart. During the hand press period, individual pieces of metal type were arranged by hand to print each sheet of text. Even if the same type was used and arranged the same way for different editions, small differences can be seen.See the picture below with the 1626 edition on the left and the 1631 on the right.

Using this method, I was able to determine that the book was either a first edition (1626) or a reissue of the first edition (1627). (“Reissue” meaning the book was put on sale again without re-setting the type or making changes to the text – which could constitute a new “edition.”) The only difference between the 1626 version and the 1627 version is the addition of a fancy, engraved title page, in addition to the original, plain, letterpress title page (which still reads 1626). The reason for these variations, or any clues to which year the copy in the Small Special Collections was published, is still eluding me.  Further research and a possible trip up to the Folger to look at some other 1626/7 copies will hopefully shed some light on this soon. I’ll keep you posted!

All the condition and contextual information, along with a step-by-step proposal based on what I see when I look closely at each object, is recorded systematically in an assessment/treatment proposal document. This document serves both as a guide for the conservator during treatment and as a reference point for discussion with the curator, who will determine if the proposed treatment aligns with the research goals for the object. 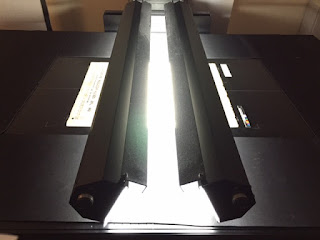 Next, the object is photographed to record its condition and unique features before treatment. Usually, this is done on a copy stand for books and documents. However, many of the maps and broadsides I will be treating were too big, so they were done on the Digitization Production Group’s Cruse scanner. The images collected by the flatbed scanner are so high-quality that each scan takes about 10 minutes to complete!

After all this, the objects are finally ready to treat, and I hope to dive in on that step starting next week.
Posted by atthebench at 10:39 AM