Hello!  My name is Quinn Morgan Ferris, and I am UVa’s new book conservation intern!  Recently relocated from New York City (via Alaska), I’m a fourth year student at New York University’s Institute of Fine Arts Conservation Center, finishing my M.A. in Library and Archives Conservation here in Charlottesville.  I will make periodic “guest appearances” when Eliza sends interesting projects my way at the bench…

As the chill of autumn truly descends on Grounds and I begin only my fourth week of work, I have already encountered some fascinating assignments. 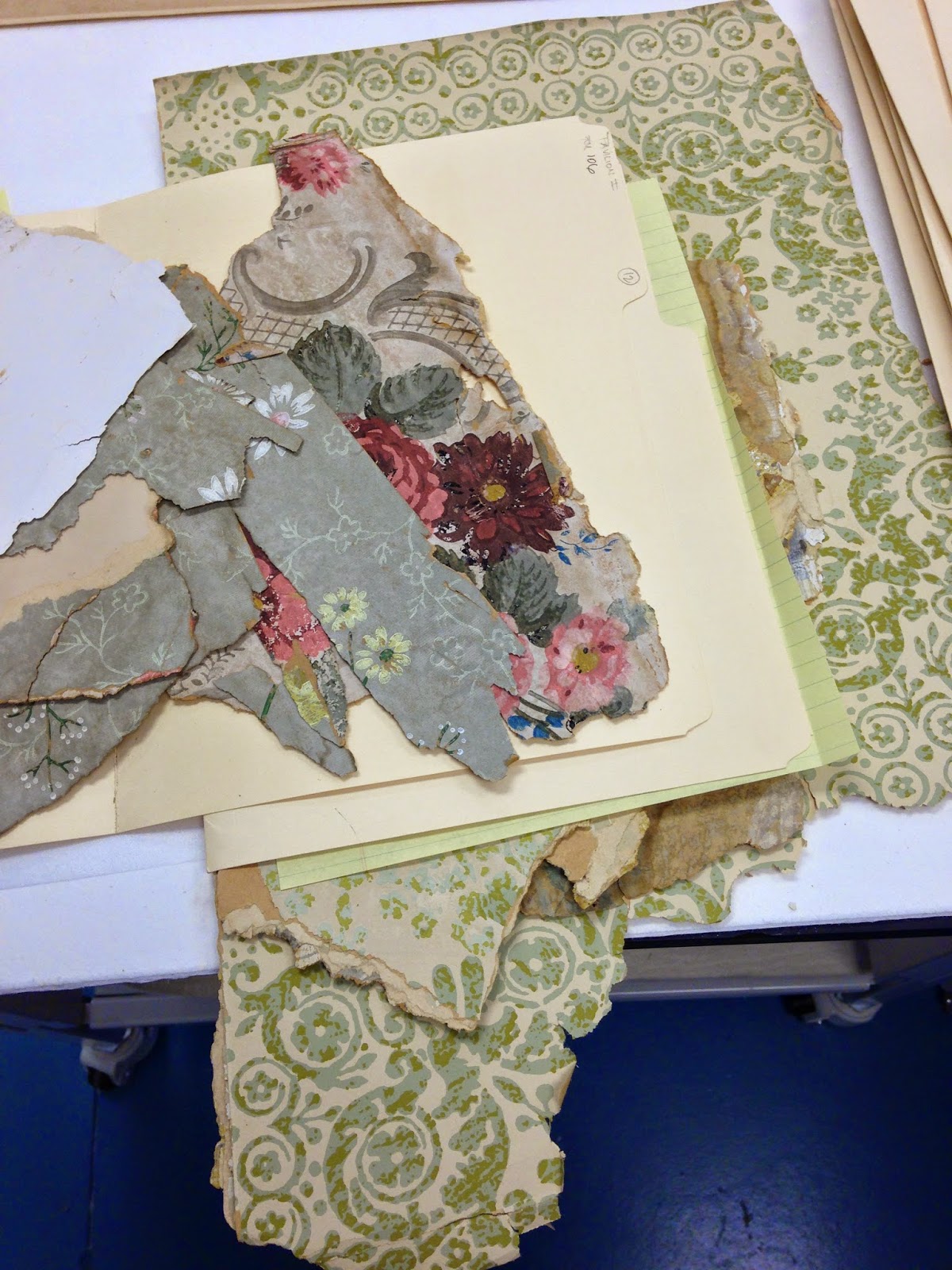 One of particular relevance to the hidden decorative arts history of UVa arrived in the lab in a stack of file folders—cut samples of historic wallpaper taken off the walls from Pavilion I and Morea House.  These samples, fragments of wall paper that had been hidden under layers of paint, were saved during a renovation of the buildings in 1988.  Since that time, they had been all but forgotten until Architectural Conservator, Mark Kutney, brought them into the lab so that something could be done to ensure their preservation and accessibility.  These samples varied in size, color and condition, and clearly had been all but lost to history.

You may be thinking “Wallpaper is cool, I guess, but I wouldn’t go as far as fascinating.”  But not so fast, my friend!  Wallpaper and its role in material culture have a long and full history which can illuminate much about the people of the past and the prevailing taste of the times. They may also reveal a thing or two about the distinguished faculty members that, with Thomas Jefferson’s guiding vision, gave shape to UVa in the first part of the 19th century.

Wallpaper has often been passed over, possibly because its very purpose is to be the background of a room.  Additionally, it is often overlooked with respect to other decorative arts because of its fragility and ephemerality.  It is often a casualty to fluctuating styles, resulting in a very small number of wallpapers surviving intact in situ.

However, this does not diminish the amount of information that we can garner from the way a room is papered, or how important it is as a decorative feature.  Choices of furniture and drapery would often be made based on the tone set by the papered walls.  Wallpaper can suggest the age, status, or gender of the inhabitants and even the very function of the room it’s in.  Layers of wallpaper on top of one another can tell you something of the changing ownership of a building, or simply the fickle preference of the lady of the house.

Conversely, in the case of our samples, what we know about the history of UVa’s buildings helps to illuminate a bit about the recovered wallpaper.  For example, Pavilion I, which adjoins the Rotunda on the Lawn’s west side, was built in 1822.  While it is unclear exactly when the samples from Pavilion I are from, Kutney explained that it would not be unusual for a professor to decorate and furnish his interiors himself.  If that’s true, then it’s possible that the bottommost layers of wallpaper may have been chosen by Pavilion I’s first occupant, John Patton Emmet.  As the professor of natural history Emmet taught courses in chemistry, comparative anatomy and botany.  Emmet resided in Pavilion I from 1825 to 1833, during which time botany was of particular interest to him—as well as to Thomas Jefferson, who’s letter to Emmet regarding the introduction of botany as a course of study at UVa can be read here.   Emmet’s botanical experiments soon became so prolific that he outgrew the Pavilion’s garden space.  In 1833, he relocated to a nearby University property, which he deemed the “Morea” House—from the Latin morus, meaning mulberry—so named for the trees Emmet grew on the lawn for the cultivation of silkworms.

Perhaps having the botany professor as the occupant of the two spaces where the wallpaper was recovered is significant to these samples? Perhaps it explains something about the simple palletes of gray and green, or the overwhelming number of floral motifs used throughout?  Yes, it is possible.  However, to venture that far into conjecture may be a little erroneous.  What we can safely infer is that these wallpapers provided the backdrop to Emmet’s daily life, academic pursuits and professorial interactions for the time that he occupied his position at UVa.

The first step in handling the wallpaper fragments was to create a documentation form.  Using this form, we were able to describe the size, location, motif and stratigraphy of the various fragments.  The next step falls to the curators, who will create an accession group, catalog records, finding aids and appropriate housing so that anyone who may be interested in accessing this burgeoning collection need go no further than the library.