The Special Collections Library recently acquired the archive of a bank from a small town in southern Virginia.  The staff at the bank had carefully saved many documents from the bank's founding and from important events throughout the bank's history.  This is just the sort of news that makes archivists very happy.  What the staff also did was frame a number of the documents and put them on display. 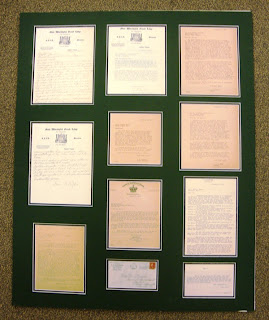 This is just the sort of news that makes archivists and conservators anxious, because where there are window mats and framed documents, there is often tape.  (Insert dramatic, horror-movie scream here.) 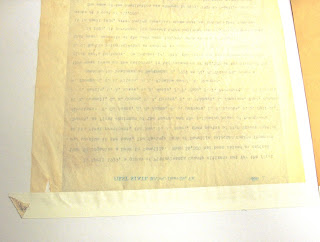 In a better world, the framer would have used some sort of photo corner to hold the document in place instead of taping it to the top of the window in the window mat.  Perhaps the roll of tape said "archival" on the package.  Who knows the tape may even be pH neutral, but that does not mean that directly applying tape to an artifact is ever a good idea.  With pressure sensitive tapes (the kind you pull off a roll and smush into place with your fingers) the adhesive doesn't really cure but rather becomes tangled in the fibers of the paper and that is what is holding everything together.  So removing the tape means you are trying to untangle the adhesive from the glue without tearing the surface of the paper. 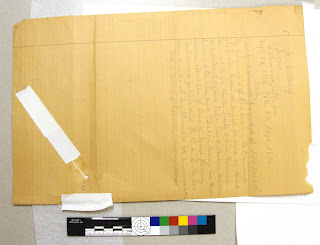 This was the scariest piece since not only did I have to get the tap off the top of the document, but there were two additional sections of tape toward the bottom of the document.  It was nerve wracking work, but we were very, very, lucky.  After two hours and some very fine work with my casselli spatula I was able to liberate all of the documents from their window mats.

So even though we had a happy ending, I would still say Don't Let the Pigeon Play with Tape!!

Posted by atthebench at 1:05 PM