As a book conservator, I spend almost as much time thinking about tape as I do thinking about books and paper.  Tape (or pressure-sensitive adhesive as we call it in the biz) is one of the easiest ways to mend a tear, and is a standard supply at home or at the office. 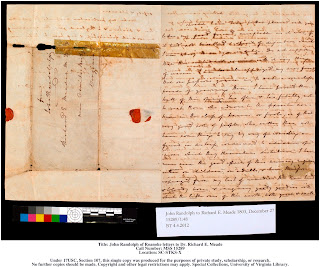 Take a look at this before treatment (BT) photo of a letter from John Randolph of Roanoke.  A previous owner "fixed" the holes and tears in the letter with pieces of tape.  The shiny section at the top left is tape carrier (the layer of plastic that holds or carries the adhesive) that is on this (recto) side of the letter.  The dark square in the lower right of the letter is tape that is on the other (verso) side and the discoloration is a result of the adhesive in the tape sinking sinking through the paper. 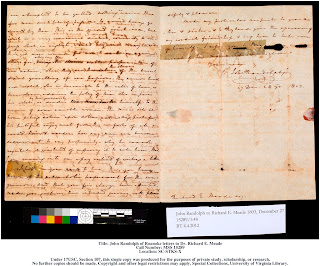 Here's the letter from the verso side, see the shiny surface of the tape carrier in the lower left corner and the translucent section in the top right.  This is a great example of highly enmeshed and cross-linked adhesive and brittle, distorted carrier!

Removing the carrier is relatively easy, but removing the adhesive from the paper can be very tricky.  Generally conservators use solvents, first testing with water and then on to stronger solvents like ethyl acetate or acetone.  If a straight solvent doesn't work, then testing begins again with a mixture.  It can take a while to find the right solvent, or right combination but if you don't find it, the adhesive won't budge; its not as though solvent  X will get it to move a little and solvent Y will move it faster. 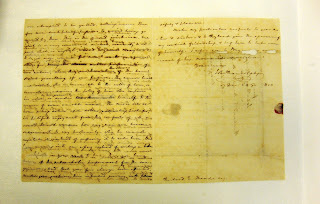 In this case, straight solvents didn't work and after I tried a few mixtures that didn't work, I reached out to my colleagues in other labs.  Everyone was generous with their recipes and eventually I found a mixture that fit the bill.  This is another verso shot of the letter taken just after I completed the treatment.  Note how the discoloration is gone, as though the tape had never been there in the first place.  Pretty amazing!

Sometimes even after all the meticulous work of testing and applying tiny patches of solvent with a cotton swab, conservation feels like magic!